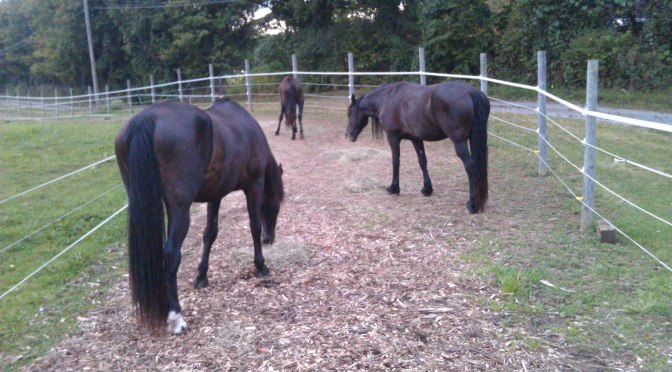 Paddock Paradise has been in my library for a few years (please see previous book reviews in which I confess to being a book hoarder).  I have come to believe that the ideal horsekeeping situation is one in which the animal can come and go as they please, rather than the model which is conventional in most boarding stables where horses are turned out for a  period and then returned to their box stalls.  Here at Cold Moon Farm, my horses are out 24/7 with access to run ins.  I was interested in this book to learn yet another different perspective on the subject. 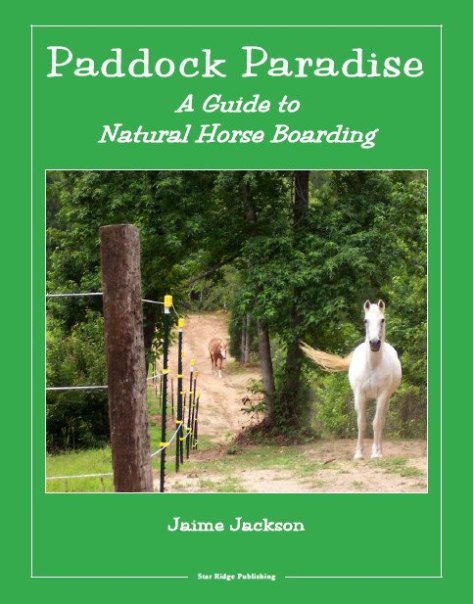 Author Jaime Jackson is an advocate for natural horse care practices, from boarding to foot care to feeding.  His work has been inspired by personal study of wild horse behavior and ecology, as well as his own experience.  In Paddock Paradise, Jackson provides readers with some background as to where his ideas originated, outlines a model for the ingredients of a Paddock Paradise, and concludes with a successful real world implementation of his system.

Jackson outlines a “day in the life” of a wild horse herd, covering in some detail topics such as herd dynamics, the search for water, food, salt licks, and shelter, as well as the role of predators in determining the herd’s habits and behavior.  He emphasizes that their search for food keeps herds nearly continuously on the move, and that the overall quality of their forage is poor.  Jackson also observed the condition of the wild horses’ feet and concluded that their nomadic lifestyle, covering all manner of terrain, assisted in keeping their feet even and strong.

“The beauty of the Paddock Paradise model is that, through a unique fencing configuration—adaptable to most if not all equine properties—and strategically applied stimuli, it “tricks” the horse into thinking he’s in wild horse country, “paradise” in other words.  Instead of resisting natural movement, he willingly engages in it.  Through stimulated natural movement, he becomes healthier, and this is our major goal.”

Jackson’s book provides a basic outline as to how a farm manager could convert their property to be a “paddock paradise”.  My (extremely) short synopsis is that one would take the existing paddock and install a line of electric fencing on the inside, about fifteen feet away from and parallel to the perimeter.  The space in between fences becomes the “track”.  The next steps include scraping away most grass and then installing any of a number of “features” which will motivate the horses to move around the track.  The features one chooses to install may be influenced by the existing terrain, amenities and resources available, but the ultimate goal is to use “Paddock Paradise as a means of getting horses out of stalls, conventional paddocks, and other modes of close confinement that simulate “predator” environments that are so harmful to the mental and physical well-being of horses” (Jackson, 2006, p. 68).

The entire notion of Paddock Paradise is a bit revolutionary, and I can’t say that I am 100% on board with all of the conclusions regarding domestic horse care that Jackson has drawn from his self-study of wild horses (one example is his suggestion that horses are best fed a mix of grass-type hays and unsweetened oats in small quantities, as this most closely mirrors a wild horse diet).  However, I do fully applaud his ability to look at the conventional beliefs regarding domestic horse keeping through a different lens.  Just because something is “the way we have always done it” does not mean that it will forevermore be the best technique.  Taking our “business as usual” ideas and holding them up to a lens to assess whether they can sustain the scrutiny, to me, is never a bad thing.  We don’t have to embrace every new idea or notion, but certainly keeping an open mind to possibilities can allow us opportunities to integrate bits and pieces into the systems which we are accustomed to.

Jackson released an updated edition of Paddock Paradise in 2016. His website expands on some of his ideas regarding natural horse care and provides examples of “real world” approaches to creating Paddock Paradises in a variety of different climates and topographies.  I was surprised to recognize after reading this book how many references I have come across to facilities with a “paddock paradise”, or people seeking same.  It would appear that in certain communities, Jackson’s “revolutionary idea” has inspired further creative thought.

I would recommend this book for people who have an open mind to alternative perspectives on horse management and to people who already embrace holistic approaches to horse care—but also to those who are pretty secure in their beliefs regarding conventional techniques, so that they can better examine them and look for areas to more closely align our human expectations of horses with the inherent “equine nature” which they all possess.