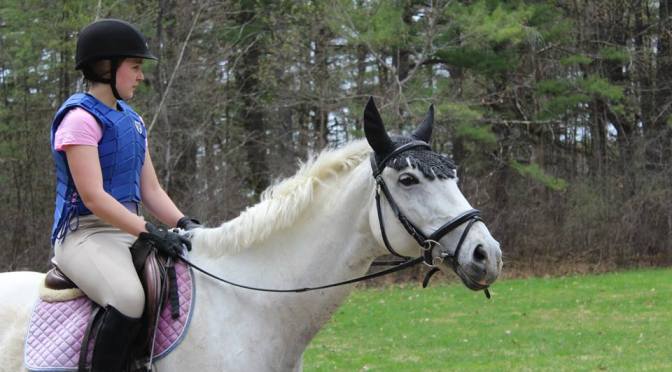 The university equine program is just barely back in action after a hiatus of nearly six weeks.  Over the winter break, I took advantage of the quiet arena and more relaxed schedule to work on tuning up a few of our wonderful school horses.  Ironically, it was an “all mare” sort of break, and I found myself working with a rotation of four of my favorite horses:  Marquesa, Whisper, Fiona and Morocco, in addition to my own “girls”.

These four horses couldn’t be more different, at first glance.  What they all have in common is that, for various reasons, they ended the fall semester not going all that well in class, and it was time for a little one on one time with the instructor for a tune up.

Having ridden most of the UNH herd at one point or another, I have firsthand knowledge of what will or will not work for each animal in terms of exercises and applications of the aids. Many of the riders I work with are at the stage of their riding career where they need to learn to modify the use of their aids to suit the individual mount they are sitting on.  The university calls our lessons “labs”, which I joke is because we are “experimenting” with figuring out which recipe of the aids will work best in a given situation.  Riders must learn what ratio to apply their aids in, and the timing, and sometimes the only way to get good at this is to play around, and to mess up a bit.  In this way, the riders are expanding their tool kit.

Fiona is a middle aged, Thoroughbred type mare.  In spite of being chestnut and a former eventer, she is hardly your stereotypical “chestnut TB mare”.  I wouldn’t describe her as hot, but I do consider her to be sensitive and the rider needs to use the aids tactfully. She is one of my most favorite horses that I have ever test ridden for UNH, and when the students started really struggling to get her connected this fall, I was kind of glad for an excuse to get back on her.  Fiona’s main issue is with suppleness—and it is chicken and the egg which she loses first, mental or physical, but once one is gone, so goes the other.

I recently read an old (September 2006) issue of Dressage Today, and there was a great article in there called, “In Search of Trust”, by Tuny Page with Beth Baumert.  I can’t find any access to it online at this point, but in the article Page is basically describing the process she went through to defuse tension in her FEI horse, Wild One.  One of her quotes is especially relevant here:

“I taught Wild One that when he blocked, the pressure from my driving aids would go on and stay on until his back relaxed, his head lowered and he started to breathe, whereupon, my driving leg aids instantly let go.”

What I realized when working with Fiona was that she and her riders had gotten into a vicious cycle of pressure/no response, as Page puts it.  When the rider would ask Fiona to step into the bridle by putting their leg on and taking light contact, Fiona tensed defensively and would raise her neck and drop her back, going almost lateral in the walk and canter and taking hectic and quick steps in the trot.  This highly tense response from the horse then caused the rider to take their leg off and try to force Fiona to lower her neck with the rein aids, which then just caused additional tension, increased hollowness, and less use of the rider’s leg.  Right from the moment the rider picked up contact, Fiona was defending herself against the rider’s aids, and the rider would play into it by removing them.

To modify this response, I found that I had to do just the opposite of what might have instinctively seemed correct—I positioned Fiona to the inside with the bending aids, stayed soft and steady through the connection, and then just quietly waited with my leg on for the energy to come “through”.  There were definitely a few strides of unattractive movement each time, as Fiona processed that I wasn’t going to go away, or change my aids, or pull on her mouth.  But it took fewer and fewer strides each ride for Fiona to realize that she knew what I wanted, and she began to lower her head and neck, relax her topline, and then reach more correctly through her  back and into the bridle.  When she did so, the stride length immediately increased and the tempo stabilized.   The response to my leg, seat and rein aids became positive, and I could apply the aids and ride her from back to front.  Basically, as Page said above, I needed to keep my leg aids on until Fiona started to relax and go forward.  Not kicking or aggressively on—just patiently on, waiting.

Whisper is another of my favorite UNH horses, and it had been years since I sat on her.  She is nearly 19 years old now, and has been with the program for ten years.  In the past few semesters, it has been harder for the students to get Whisper working correctly over her back, and she has become stickier in her transitions, especially trot to canter.  I had attributed this to her advancing age and the fact that she has been a school horse for nearly a decade, but after watching her proceed to ignore most of the aids of a fairly strong rider last semester, I decided that I needed to feel for myself what was going on.

Whisper’s situation was different than Fiona’s, but as I suspected, it required a similar solution.  Left to her own choices, Whisper will travel in a long and flat outline, becoming disconnected by poking her nose out and blocking the hind end through stiffness in the muscles of the back, rather than through hollowness.  This mode of travel of course does her no favors, and when the students go to jump with Whisper, they quickly realize that they now lack the ability to adjust her canter at all. In my opinion, Whisper was a pretty easy horse to get connected—she has good training, and was always pretty willing to work correctly if you asked her to.  I thought that maybe time spent as a schoolie had caused her to become desensitized to the aids, and that this was why the students were struggling.

I quickly realized that this was not the case.  Within just a few moments on our first ride, Whisper was working willingly in a round and balanced outline, staying freely forward and reaching into the bridle.  She was adjustable laterally and longitudinally, would chew the reins forward and downward, and even easily offered the balance required to counter canter.  Hmm….all of the buttons were clearly still in place and functional.

“Years ago, when I rode event horses, I learned about the dynamics of why kicking a horse doesn’t work…When a rider kicks, for every moment the legs and spurs are on, there’s a moment when they are away and getting ready to kick again.  So the horse experiences pressure/absence of pressure….and so on. ..This is bad training and doesn’t work.”

Page is specifically referring to why this approach is ineffective when trying to get a horse to pass a frightening object.  You cannot force a horse to trust you, and even if you are successful in getting them to go on one occasion, the rider will have done nothing to encourage better harmony or responsiveness to the aids in the future by simply being really aggressive and then letting go.

In Whisper’s case, riders have gotten into a cycle of asking her to do something—flex her neck to the inside, for example—and then being satisfied with a lackluster response.  They put the pressure on in the aids, but then they release it before the horse does.  Whisper has learned that she can just swing her head, wait, and in a second, the rider will most likely give up and let go, and then she can swing her head back to where it was.

It is the same with the leg aids.  If the rider has not developed the ability to isolate their leg and seat, they might apply a driving leg aid, but simultaneously be holding with the seat.  So Whisper only chooses to listen to the “whoa” from the seat.  Meanwhile, the rider is now kicking, and Whisper steadfastly ignores these ever increasingly insistent aids, while both rider and instructor become frustrated with the result.

The key with Whisper is to hold the rein aid just that moment longer, until she gives, and to maintain the soft lower leg with a following seat.  It literally just takes that little bit more of consistency, of the rider really knowing that what they are asking is correct and that it is going to work.  Whisper teaches the rider to be clear and consistent. In Whisper’s case, I need to teach better, to help the students to understand that it is not unfair or incorrect to give a clear, direct aid and expect a response.  In the same issue of Dressage Today, Lisa Wilcox was quoted as saying something along the lines that the “give and take” of a half halt should be more like “take a millimeter, give a millimeter” than anything more significant or dramatic.

Riding these horses was a valuable experience for me as an instructor.  It helped confirm for me that my suspicions regarding the root cause of some of these common challenges was accurate, and that confident, correct riding would resolve the problem.  I look forward to getting started with the semester in earnest so that we can continue to add to the students’ tool boxes.