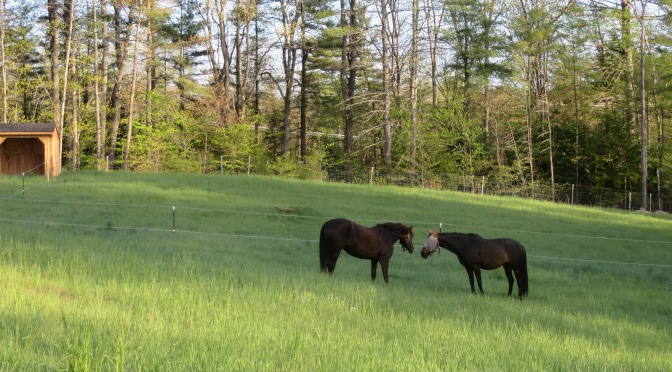 Mares aren’t everyone’s cup of tea, but I don’t mind them and without any sort of conscious decision making on my part, I find that I have now acquired a herd of three of them.  Little did I know, however, that establishing harmony in this herd would prove to be so emotionally draining for all involved.

For the past nine months, the Dark Mare (Lee) has contentedly been living here alone at Cold Moon Farm.  She was pretty settled in her routine, hacked out here there and everywhere alone, and admired the goats which live next door.  This all is quite impressive given that at her core, Lee is a pretty anxious and insecure horse who draws a lot of her confidence from the animals around her.

But last week, I upended her little world.

On Wednesday, I brought home our new friend, Spring Hollow Marquesa.  Marquesa is a 20 year old purebred Morgan who has been a part of the school horse team at the U of New Hampshire for the past eighteen years.  She is still quite full of life—everyone knows that a 20 year old Morgan is merely middle aged—but as far as we can remember, she hadn’t been off the UNH property in nearly fourteen years, and that just to school cross country.  Considering all of this, the fact that I was able to quietly load her on my own and bring her home uneventfully is pretty impressive.  But even so, the move was a big lifestyle change for her, too.

Marquesa is a sweet mare, and in my twelve years of teaching off of her, I have never seen her so much as flick an ear back at another horse, never mind exhibit any of the other stereotypical “marish” behaviors that people dislike.   I figured Marquesa would be dominant over Lee, who would be happy once again to have an Overlord to tell her where to stand and what to do all day.

I put them in side by side paddocks to meet and greet.  There were a few quiet squeals but nothing too terribly dramatic.  I left them like this overnight, and then the next day turned them out together for one hour on grass.  They seemed to be pretty content with one another, and were clearly taking comfort in each other’s presence—while still exhibiting all of the behaviors of sorting out dominance. And I started to see a side of Marquesa that I hadn’t before; she was acting a little bit like a bully.

Marquesa’s main body language cue was the snaking of her neck.  Watching her do this motion over and over made my own neck hurt.  She walked circles around Lee, arching her neck and snaking it around and around.  Lee clearly understood this meant to pay attention and smartly trotted off.  I didn’t ride her in those forty-eight hours, but I suspect she easily covered ten or twenty miles being ‘driven off’ by her alpha.

At feeding time, I stood guard between them.  Again, the first few meals were funny…Marquesa actually tried to get to Lee’s food, in spite of my presence.  I drove her away with voice and body movement, and she reluctantly moved off, snaking her neck the whole time.  What had happened to the sweet mare that I had known for twelve years?

This is where my ‘mare drama’ started to remind me of the movie Jurassic World.  If you haven’t seen it, the lead male character, played by Chris Pratt, is a trainer who works with a pack of the highly intelligent velociraptor species.  If you are a devotee of the franchise, you will know that the “raptors” are clever, communal hunters.  They can open doors and seem to be able to use logic to solve complex problems.  If you are going to be followed by dinosaurs, raptors are not the ideal.  Pratt’s character handles the animals by establishing himself in the ‘alpha’ role; this required a relationship with each individual but in particular the beta raptor, Blue.  This alpha role was reserved for him alone; other humans could not step into his place within the hierarchy (which is played up to great theatrical drama in the movie).

That would be me.

But I wasn’t done disrupting the peace and harmony previously enjoyed at Cold Moon Farm.  Two days after bringing Marquesa home, Annapony also joined the group.  Having previously experienced the challenges of having Anna live in the same paddock as Lee when we went to Tamarack Hill two summers ago, I had already decided that side by side living was going to be preferable this time around.

So now there were three raptors.  The challenge:  figure out how to manage the group so that horses can be handled and ridden safely with the minimum of risk to person, animal or property.

The first forty eight hours after Anna came home were probably the worst.   All three horses were acting like feral creatures; unhandled and rank, ill behaved, no respect.  I really wondered if it was going to work out.

Right now, the horses spend most of the day in the sacrifice area as they are gradually introduced to grass.  Three horses in two paddocks and one human means that in order to get everyone into the grass fields, someone at some point is going to be alone.  Anna was the logical choice, and she more or less was good about it—except for one day, when at the end of the lead rope she demonstrated the most amazing array of airs above the ground that I have ever seen from her.  I took to wearing my helmet for turn out and turn in.

The first time Anna saw the peaceful goats that live next door…velociraptor snorting and passaging up and down the fence line.  So Lee next to her also became concerned about the goats and starting running around to help her feel better.  The same goats that have been here THE ENTIRE NINE MONTHS SHE HAS LIVED HERE.  Lee’s behavior then irritated Marquesa, who started her neck snaking behavior again. This sort of communal drama played itself out repeatedly.

Then came the process of separating the mares for basic care.  You know, those unusual sorts of things we like to do with them—daily grooming, riding, etc.  Oh the screaming and the calling and the nervous pooping.  The two who were left together outside weren’t happy.  The one who was inside being tacked up wasn’t happy.  The drama. The chaos.  I was left truly questioning my judgement in bringing them all together into one place.

With the mild weather, I have been sleeping with the windows open, which meant I could hear every snort or squeal, and every set of trotting hoof beats (no doubt as Marquesa snaked her neck again and set Lee off moving).  I tried only to get up when the noises sounded extreme, which took some discipline.  Still, I slept with the flashlight by my bed, ready to shine it out on their fields in the front of the house at the first sign of significant drama.

Like any good raptor pack, this group has been religiously testing the fence line.  Now, it is on the agenda for the summer to do some replacement of worn boards, run a new fenceline down one side to block off the wet area and finally install some functional electric wire to keep them off the boards.  But these edits have not yet been made.  So far, we have broken two boards and destroyed the bungee gates which were separating the two paddocks, resulting in all three raptors being out together one morning earlier this week.  That ruckus I slept straight through, and in the morning I found them all fairly peacefully existing in the same space.

But day by day, the raptors seem to be settling into their new routine.  They are almost ready for full day grass turnout, which will give them plenty to do other than test boundaries—and if they do, they will receive a strong electric charge for their efforts.  Each horse can now successfully be taken away from the others for their daily care and exercise, with Lee being the last one to come around (it is as though nine months of pent up frustration over being home alone are all coming out in one week of temper tantrums).  Sweet Marquesa is back to being her cheerful self and is learning how to be an independent trail horse.  And Annapony has really set the bar high with excellent dressage schools and a solo hack two miles down the power line trail and back. Perhaps there is hope for this pack after all.

I wish I could say that I had stayed calm and cool through it all.  In reality, I was a nervous, worried mess and could barely focus for my worry.  If I had had a friend in my situation, I would have said the same things my friends said to me:  “Give it time”  “they will work it out”.  Intellectually, I knew this but emotionally I stressed.

In the meantime, we continue to adjust to our new lifestyle. The thing about mares is that you can’t force them to do what you want.  You must present the question and then give them time to choose to participate.

I think the raptors are choosing to be okay with their new arrangement.

2 thoughts on “Managing your Velociraptors…Or your herd of mares”

Follow The Academic Equestrian on WordPress.com
Join 697 other followers