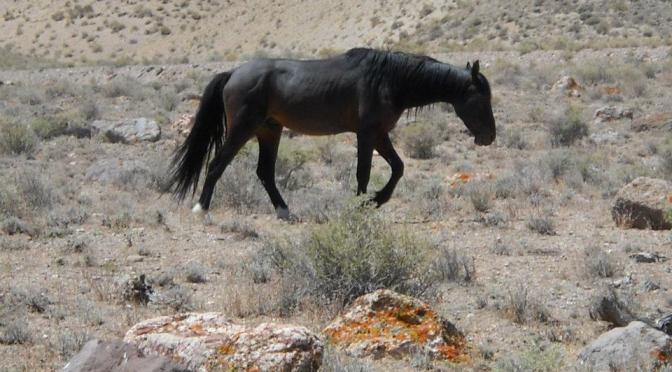 The American mustang has always been an enigma. He has been seen as a scourge, a resource, an icon and a symbol. He is simultaneously revered and despised. And unlike some other legendary figures of the American West, the Mustang is still living on those wild, rugged lands that have made him a study and tough creature. In his book, Wild Horse Country: the History, Myth and Future of the Mustang, Pulitzer Prize winning writer David Phillips takes us on a journey to better understand how the complex history of the American Mustang continues to shape his present and future. 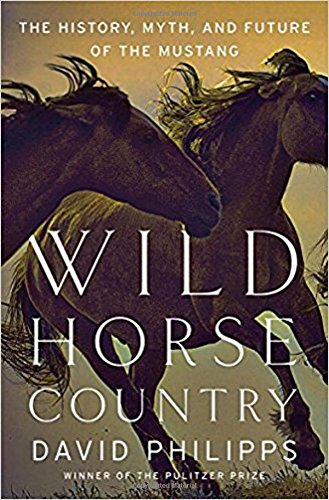 The first time I saw American Mustangs was in the mid-2000’s, on a horse packing trip to the steep and rocky trails around Montgomery Pass, on the California/Nevada border. When I visited, the herd there was robust and numerous; they were arrayed across the rolling Adobe Valley Flats in family bands of two to five horses, but collectively there were well over one hundred. At the time, these mustangs were doing well, as evidenced by the numerous foals, and were valued by the local community as a source of tourism activity.  I have no idea how time has treated these animals, which live on a land with no margin for error. But as I departed the region, bound for Las Vegas and my flight home, I encountered a smaller, solitary band. They were clearly not doing as well and looked as worn and wind blown as the rocks that surrounded them. Mustangs can look very different depending on the time and space in which you view them—a concept that Phillips drives home in this book.

Wild Horse Country takes the reader to Montgomery Pass and beyond, in Phillips’ search to understand what the American Mustang means to us today through an exploration of their history. He admits in the introduction that he is not a horse person, but is drawn to mustangs because he “loves the parts of the West that remain untamed” (Phillips, 2017, xxv). For Phillips, like many other Americans, mustangs are symbolic of the pioneer spirit that is synonymous with much of our frontier’s history. But he also connects the continued existence of Mustangs to a larger question: what does their legacy mean for the future of a land that is increasingly regulated and penned in?

Wild Horse Country is part history lesson, part first person narrative, and it is written to appeal to a broad audience. Phillips teaches readers about the horse’s first appearance in North America, as a tiny fox-sized creature called Hyracotherium and then its subsequent disappearance from the continent. He discovers how the horse helped change relations between Spanish explorers and our Native Americans, who took to training stolen animals with a grace and ease that made their partnership seem inevitable. Phillips looks at the mustang’s impact on art and culture, but also its effect on the lands and people of the West. He asks hard questions of the Bureau of Land Management, tasked with managing both mustangs and the land they exist upon. But he also interrogates those advocates working to preserve the mustang, and investigates the conflicts and overlaps between their agenda and those that might seem to be working in opposition.

This book is simply a fascinating read—the pacing is perfect, and Phillips brings his considerable investigative and research skills to the table in assembling each of these chapters. He artfully brings you to the lands he calls “Wild Horse Country”: “It’s not the land the horses chose. It is just the land that was left to choose. Hardscrabble islands of desiccated emptiness that herds were pushed into. Put together the patchwork where wild horses are found in the West and you have an area the size of Alabama” (Phillips, 2017, p. xvii). He deftly untangles the web of connection among the horses, the people and the land. And by the end, he even proposes a solution that might help to keep all of the pieces in balance.

This is perhaps the most even handed take I have ever read on the conflicts over mustangs that continue even now. If you are finding yourself running out of reading material during this pandemic, do yourself a favor and access a copy of this book. You won’t be disappointed.