I have been lucky enough to know Cindy Canace, a USDF Gold Medalist and USEF “S” dressage judge from New Jersey, for many years.  However, this past week was my first opportunity to actually ride with Cindy in a clinic setting, and it was a great occasion to learn more about her training philosophies.

Cindy has made a career out of working with difficult, spoiled or otherwise challenging horses that others would not, and turning them into successful and happy performers.  In order to do this, she has established a system which she adheres to in terms of use of the aids, rider position, and progressive exercises.  By being clear and consistent, her horses respond with increased confidence to the rider’s aids.

Annapony and I had just ridden several tests in front of Cindy at the recent University of New Hampshire dressage show, so she had a current picture in her mind’s eye of where things were at with us in the competition arena.  Cindy pointed out that a clinician’s main job is to provide a fresh set of eyes, and not to usurp the place of a regular instructor.  Specifically for Anna, Cindy wanted to challenge the honesty of her connection to the bit and work to achieve increased throughness.

For a horse competing at First Level, Cindy says that she would rather see a more open position in the neck with good energy and balance than a horse which has been pulled into too tight or restricted of a shape in the neck.  This is probably one of the reasons why Anna has scored well in front of Cindy, but as we are working towards moving to Second Level, it is necessary to achieve a greater degree of roundness and uphill balance.  Anna would prefer to be too open in the throatlatch if left to her own choices; because the purpose of Second Level is partially to confirm that the horse is “reliably on the bit”, we will need to work to erase this. 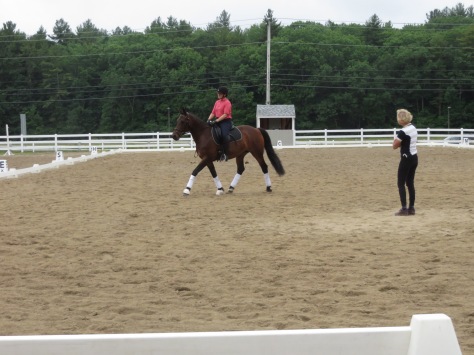 Cindy had me move my hands closer together along Anna’s crest and ride with a much shorter rein than where I would tend to carry it.  “Put the bit where you want your horse to go” was a message repeated many times during the session.  She emphasized that the rider needs to keep her arms elastic, her shoulders down, her neck soft and her hands forward.  Cindy wants the horse to truly be seeking contact with the bit; it is the horse’s job to reach towards the bit all the time, rather than the rider taking the bit back towards their own body.

One of my greatest challenges is that most of the time I ride on my own; when you do this for too long, it is easy to pick up little bad habits.  One of my current ones is using too much inside rein, which blocks the inside hind and causes too much neck bend.  To help “reprogram” my aids, Cindy had me ride a diamond shape.  Imagine a square set within a circle, with points placed on the center line and equidistant from these points on the walls in between.  To turn Anna at each corner of the diamond, it was important to keep the inside leg at the girth and to bring the outside leg slightly back, pushing her around primarily with the outside aids.  I then used the inside leg to stop the turn and pushed Anna slightly out towards the outside aids again while aiming for the next point. We did this at the trot and the canter, decreasing the size of the circle as we became more proficient.

For me, the hardest part was to keep my hands out and ahead of me (‘put the bit where you want your horse to go’), even when Anna became less round or didn’t turn as crisply as I wanted.  The thing is, when your horse has gotten used to you supporting them in a particular way and you stop doing that, it takes them a few repetitions to sort things out for themselves.

Many horses have learned to balance on their inside reins; therefore, they can be taught to balance on the outside rein instead.  However, the correction takes time and dedication on the part of the rider.  “Keep your hands together and think forward,” said Cindy.  “The horse must step up to this.  Think of always pushing the reins out there.”

Cindy reminded me that whenever I am tempted to pull on the inside rein that I needed to engage my inside leg instead.  At this, I had to chuckle—I must give this instruction myself many times per week, but it is good to know that even we instructors need reminders! Cindy also had me use a little sense of leg yield into the downward transitions to increase the connection to the outside rein, another technique which I like to use regularly. It is always good to know that your instincts are on the right track.

Cindy is wonderfully complimentary towards the rider’s horse; having ridden in many clinics, I think this is an important quality. Clinicians only get a snap shot of a horse and rider, and it is nice to hear what their immediate impressions are of the partnership.  While I usually think of Anna as not being super forward thinking, Cindy commented that my pony has a good overstep in the walk and trot; the more elastic and forward thinking that I keep my arm, the better Anna reaches through her topline and into the bit and the better the overstep gets.

While discussing the importance of overstep (when the landing of the hind hoof reaches past the print of the front hoof on the same side), Cindy reminded auditors that there is a difference between fast and forward.  She says that in her judging, she sees too many horses which are being ridden so energetically that they move with a fast, quick tempo, causing the quality of the horse’s balance to literally go downhill.  While activity in the hind end is required to get true reach through the horse’s back, it cannot be accomplished at the cost of balance.

“We all like to micromanage,” said Cindy.  “Remember to ride the horse with leg and seat to create the bending.  Really use the outside rein to turn, even to the point of pushing the inside rein towards the horse’s ears.”

Cindy’s overall theme was one of consistency and clarity in terms of expectations for the horse and intended outcomes.  When the horse is trying to sort out what it is that the rider wants, she emphasized that staying steady was of the highest priority.  It is much less confusing for the horse than if the rider suddenly switches her aids before the horse has answered the original question.   “Don’t change the rules of the game,” said Cindy.  “Don’t trade one problem for another—keep your aids consistent until you get the correct answer.”

Many thanks to On the Bit Events and the University of New Hampshire Equine Program for co-hosting this clinic!

One thought on “A Clinic with Cindy Canace”